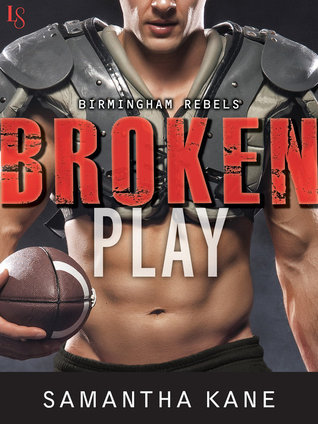 Marian Treadwell knows all about the video. And now that she’s the Rebels’ new assistant offensive coach, she can’t look at Beau and Cass without picturing their hard, naked bodies—with her pressed in between. Marian would like nothing more than to indulge those impulses, but she knows better than to get too close to her players, a bunch of adrenaline-fueled alpha males who don’t always follow the rules.

Just the thought of sharing the gorgeous yet guarded Marian drives Cass wild. At first, Beau isn’t sure she’s right for them . . . and lately, all he desires is a little alone time with Cass to explore their new intimacy. But it’s only a matter of time before Cass breaks through both of their defenses. Because when seduction is the game plan, he always plays to win.

NOTE: This ARC was given in exchange for an honest review.

However, relationship wise, I just don’t think it is going to last. I’m all about the happy ever after and all those stuff, I want the happy ending so much that I don’t think this characters will work out forever. But whatever, this is a book and the most important thing that happens in a great book happened. Hot sexual interaction and intense chemistry happened and it really got me entertained till the end.

The characters were intense. Even Marian was intense and unexpected. The other two was all good and hot though. If you’d ask me, I think they are both gay. Which obviously means, they can totally survive without Marian and I would have loved that. I would have considered that the happiest ending but in the end the threesome won and that’s okay at least I get the front row of the sex part. But now that I think about it, there was a lot of kinky hot sex and that’s why the book has a plus one for me. I actually enjoyed reading the trio sex but I’m really not in to it.

I don’t think I’ve read any of Samantha Kane’s books before but just basing on this one I am sure she’s done very well with the other books. This book has a really broad message that it kept my mind open to possibilities that these kinds of things existed. Granted that this 4 stars is pushing it, I think the book was worth even more if I was just really into all these stuff.

More About the Author

Samantha Kane has a master’s degree in American History, and taught high school social studies for ten years before becoming a full time writer. She lives in North Carolina with her husband and three children.

In real life, there is no such thing as forever. It's a good thing that books aren't alive.